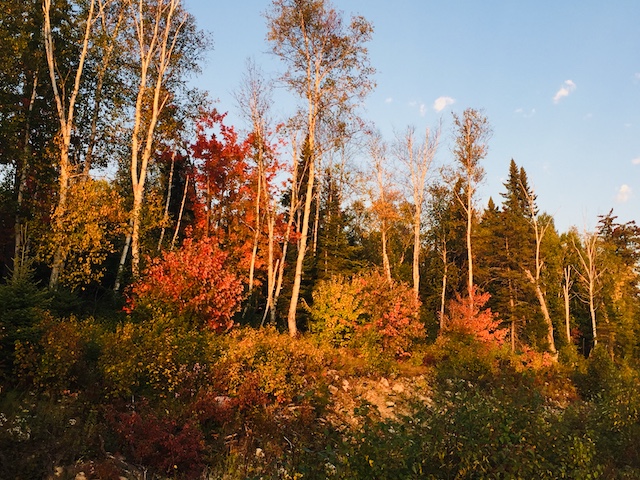 Ready or not fall is here. I realized it was true a few weeks ago when I went fishing with my husband in Canada. Surrounded by brilliant colors, I looked around at the shoreline and felt the weight of my troubles somehow lift off my shoulders. While we quietly sat with the sun on our backs and fished, a peaceful sense of well being flooded in as the waves gently rocked the boat. I left my thoughts drift to where ever they wanted to go, making a point not to think about my current troubles or things I had to get done. I thought some about God and human nature and how everything usually turns out if you have a little faith in both. The afternoon was relaxed and calm and I left the lake feeing renewed. The fishing wasn’t spectacular that day but I feel I caught something much better.

Mother nature casts her spell in Autumn and everything she touches magically transforms; nature by appearance and man by state of mind—Donna Lovitz

I know the next few weeks are going to be a full and I need to remember that fishing day as I plan to release my first book ‘Ryley’ on November 5th. It’s a book in a series called ‘Betting on Paris’ with four other authors. It’s not a part of my trilogy which I plan to release in May/June of next year about sugar beet farmers. My plan is to post  a link on my website and on Facebook in the next few weeks where you can sign up to get updates about my book releases.

Here’s a little more about Ryley and the series:

Sometimes the best bet is the one you lose…

Each year in mid-August, the former college roommates meet up on a girls-only trip somewhere in the world. This year, it’s Paris, the city of museums, art and romance. One night during their vacation, the girls engage in a serious talk about the sorry state of their love lives and collectively decide they are swearing off men. Instead, each woman is intent on pursuing her life’s goal. Falling in love is the last thing on her mind!

Fresh from her girls getaway to Paris, advertising executive Ryley Sanders is ready for success. Her eye is on the director’s position at her company, and nothing is going to stand in her way. She’s the golden girl of the agency and usually heads up projects solo, so when her boss hires hunky executive Matt Kantor to co-head with her on a major campaign, it puts a crucial glitch in her plans. She isn’t thrilled about sharing the limelight with the new guy, especially when she wants to shine alone in the eyes of upper management. Charismatic Matt has his own ideas that have swayed their boss into siding with him on vital campaign decisions. Will Ryley learn to work with Matt—and can they keep it strictly professional?

Under Pressure<< >>Housework Can Kill You- Or Just Stunt Your Personal Growth.

You can leave a reply or Trackback this post.