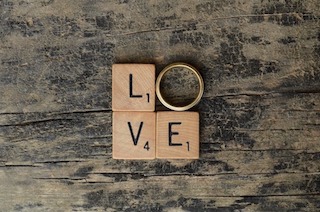 I was a waitress/ bartender for twenty plus years. I liked waitressing and anyone in food service can testify that tips greatly depend on being attentive. I kept an eye on the bar and on my tables and doing so I noticed a thing or two about longtime committed couples. Many barely spoke to one another as they waited for their food and if they did, it was a brief comment or an occasional nod. Often, it seemed to be a quiet time while their attention was focused on other things or places in the room. Thankfully, my faith in romance was restored after I met Bill and Ginny, a couple in their late seventies. They rendezvoused for lunch every week after he played golf with the guys and she quilted with the gals. It wouldn’t take long for them to be settled at a table and be enthralled in one another’s account of the day’s events. Their eyes and minds stayed on each other and it was obvious that they truly loved being with one another. I learned later they had met during World War II when he came to a dance hall with some navy buddies. Bill told me it was her sparkling eyes and captivating smile that drew him in from across the room. Ginny said something had drawn them together like magnets. It had to have been powerful, because she was engaged to someone else at the time and two weeks after meeting Bill, they were married. I was a honored to be a guest at their fiftieth wedding anniversary. The sparkle was still in her eyes that day and the way he looked at her, I got a glimpse of what happened at that dance hall back in the early 1940’s. I still believe they were the most in love couple that I’ve ever met. This Valentine’s Day/Night when you’re with your sweetie remember it isn’t just about the flowers and the chocolates or the fine dining. It’s about spending your time and full attention on the one you love.