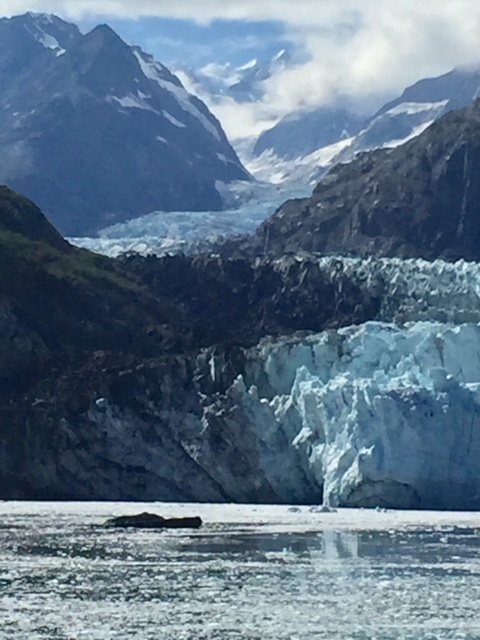 My husband and I recently took a trip to the last frontier—Alaska. We saw many unique and beautiful landscapes still being formed by glaciers. We learned that glaciers exhibit a brilliant blue color and are actually moving rivers of ice. Most of the glaciers we saw had receded into the mountains, but a few had flowed down to greet the sea. Some were massive while others were small and perched along side the mountains, but all were pushing their limits and creating something new.

Like every cruise, there was a karaoke night and I reluctantly entered after the announcer begged several times for someone to sign up. Twelve people entered and I was one of the six that would go on to the “Voice of the Ocean” contest. Had I known it qualified you for a contest that would require two practices with a live orchestra and a coach, I doubt I would’ve done entered. At the time, it seemed so easy to say “yes” especially after a couple glasses of wine. They gave us a very short list of songs and told us to pick two. During the first rehearsal, it became evident that one of the contestants was a professional singer and we all knew she would win. One contestant was a former cruise ship (theater) performer and he was great. Another man who was disabled, sang okay on the original karaoke night but rocked it at rehearsal. The youngest of the group was twenty-two and very impressive with the memorization of his song. One lady, the oldest in our group, had a very sultry, sexy voice and I thought she may give the professional singer a run for the win. Everyone was very calm, cool and collected at the rehearsal except for me who appeared as a blundering idiot. It was scary to face a professional orchestra and sing like you knew what you were doing. I couldn’t ignore the disappointment on the faces of the musicians when I asked them to take it from the top one more time. I was worried I’d let my coach down as well as myself. The second and final rehearsal included a stage sound check with concise instructions about the show. It got us used to the chairs of the judges sounding off and turning when they picked you. It was very close to the “The Voice” on television. During the second rehearsal, all the contestants except for me, once again appeared composed and confident. I reminded myself that my husband and the countless couples we had met on the cruise would be out in the audience and it was supposed to be a fun activity. Finally, on the last sea day, I found myself in a dressing room waiting to go on. The music was loud and it was hard to hear the person singing from back stage to tell what kind of job they were doing. I was second to perform and held my breath in anticipation. The lights went dark and I stepped onto the designated spot and lifted the microphone to my mouth. I sang the first line of my song and that’s when the bright lights magically hit me and I couldn’t see much of the crowd in the theater. The words to a Supertramp song came to mind about how wonderful being on the stage feels. I felt like I was alone and sang like no one was listening but me. Believe it or not, I did get all three judges to vote for me. In the end, the professional singer was fabulous and won the trophy. Everyone, including my husband, told me that without a doubt I had came in second. He and the others said that the other four contestants sounded nervous and apparently didn’t perform like they had at rehearsal. I enjoyed getting to know them and I know that I received something much better than a trophy—a nice big slice of confidence. The whole experience showed me not to be afraid of pushing my limits to achieve something that I didn’t think was possible.

From Out Of The Blue<< >>The Way We Were