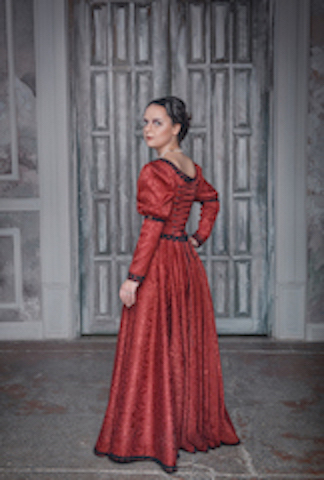 Halloween is around the corner and I’ve got a spooky tale to tell. A few weeks ago two close friends of mine, Phoebe and Dan, let me in on a recent experience of theirs and the story made a chill run down my spine. They booked a dinner cruise aboard a river boat based in a popular southern Minnesota town. To extend their get away, they decided to stay in town for two nights at a bed and breakfast not too far from downtown. The B&B was an elaborate, well preserved mansion built in 1884. It had a three stories and each room was named after a famous author. They arrived on Wednesday afternoon and checked into the Lewis Carroll bedchamber on the third floor. Carroll was the author of “Alice in Wonderland” which was written in1865.

Phoebe and Dan went out and did some shopping then returned to the B&B after dinner. The weather was a little unstable with rumbling thunder and occasional flashes of lightning and they decided to stay in for the evening. They toured the historic mansion and soon discovered they were the only guests in the whole inn. Calling it a night, they climbed the stairs to the third floor and once there, watched the sheer curtains in the hallway gently blow away from the tall windows. Both Phoebe and Dan giggled on the way to their room and commented that it looked like a scene from a horror movie. Moments after they turned out the lights, Phoebe got up to go the bathroom and Dan rolled over with closed eyes but was still awake. He felt a wave of cool air pass over him and opened his eyes. A woman stood by the door and Dan assumed it was Phoebe.  “Where are you going?” he asked. “Are you going downstairs for some water?” When the woman turned, he could hear that she was crying and knew it wasn’t his wife. Her hair was pulled back and up and she wore what Dan called “a long, old fashioned dress.” She stared at him and sobbed,”He wouldn’t even kiss me.” Dan blinked a few times and the woman disappeared. Phoebe asked Dan who he was talking to when she returned from the bathroom and he told her what had happened. My friends aren’t not the superstitious types and they blew it off as some kind of crazy nightmare. The next morning they went downstairs for breakfast and didn’t lock the door of their room knowing they were the only ones there. The two staff members were busy downstairs making breakfast and Phoebe informed them they didn’t have to make their bed but they would like more towels. When they returned to their room, they found the door was locked. This struck them as strange knowing the staff was busy downstairs and the door had to be locked with a key that was in Phoebe’s pocket. Again, they shrugged it off and went to town and did a little site seeing. They returned early in the day to freshen up for the dinner cruise.The inn keeper apologized that no one had been to the third floor yet but she would get them cleaned towels right away. Phoebe pulled up the bedspread before the inn keeper got to the room and three, red, glass beads shaped like drops flew onto the floor. They looked like something used in flower arrangements or for decoration. It was strange because no one had been up to the third floor and had the beads been on the bed all night they would’ve surely landed on the floor earlier. On Friday morning when they were ready to leave Phoebe asked Dan if they should take the glass beads with them. He wanted to forget the whole incident and told her absolutely not. She put the three drops on the mantel above the fireplace in the Lewis Carroll bed chamber and they left.

Days later at home, Phoebe went to wash her glasses and was stunned to find one of the red glass beads inside the cleaning cloth in her purse. She was frightened and decided to leave the bead in the garage on the work bench instead of the house. For good measure before leaving the garage she stated,”Evil spirits go away” then bolted for the door. When she grabbed onto the door knob, somehow she cut her hand. This story is true and scary to me because the people involved are very credible. I don’t know what the significance is with the three, red, glass drops but if anyone does please let me know. Happy Halloween to all!

The Way We Were<< >>A Tribute to Bucket Head