Why I Wrote Heartbeat of Desire

Why I Wrote Heartbeat of Desire 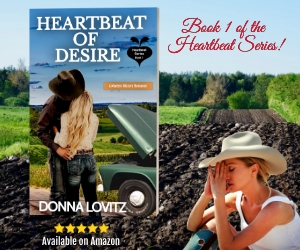 It all started when I went to my parents’ house one afternoon for coffee. Somehow we got on the subject of dad’s farming days when he was a child. His father and mother had a thrashing machine, six sons and four daughters who helped them run a farm in the 1920’s—1950s. They thrashed their own farm fields and also some neighboring farms in the area. As my father talked, I gathered it was a lot of hard work, but some fun, too. He had twin cousins around his age who were practical jokers. When they were quite young, they somehow unhitched the work horses from the wagon without anyone noticing. When my grandfather got onto the wagon he shook the reins and shouted, “Giddy up,” and then watched the horses run off toward home. One of the pranks they pulled off you will find in my book — HEARTBEAT OF DESIRE. I don’t want to spoil it for anyone so you’ll have to read the book to find out!

I went home with my Dad’s stories still dancing in my head and dreamt later that night. I had always thought about writing a romance novel and I wanted it to be something that would keep my interest. A book with a Dallas/Dynasty feel crossed with the realities of hard working Minnesota farmers. Something believable that wouldn’t be boring or make me want to throw the book across the room and say, “There’s no way would that happen in a million years.”

Days later, I returned to my parents house and told them I planned to write a romance novel. My mother wanted to know if I was serious, while my dad only smiled. He usually wasn’t too encouraging about such things and I expected him to ask me if I were crazy. Instead, he in went into the bathroom and brought out a copy of the Reader’s Digest. Inside was a story about Frank McCourt. Frank, who had endured a very hard life in Ireland, came to this country and became a teacher and a renowned author. I had previously read two of Frank’s books —Angela’s Ashes and ‘Tis: A Memoir by Frank McCourt years earlier. While I read them, I discovered just how Irish my own father was. Frank referred to a mirror as a looking glass like Dad had always done, and as a joke they both recited the Irish phrase: “They must have dropped you when you were a kid.”

I chose to write about the Watson/Montevideo area because in my dreams I saw a river and flat fields. It was a coincidence that around this time I learned some about the sugar beet farmers from a good friend who is an agronomist. I set the book in the seventies era because I believe it was more of a stress free time and most importantly— I grew up during that time. I went to Montevideo and interviewed as many older farmers as I could to get an idea of what the time period was like. I can’t explain it but looking back now, it seems the characters wrote the story not me.

I’ve come a long way since I decided to write a book and I’ve still have a long way to go. There is more to writing a book than most people realize. I hope you will read HEARTBEAT OF DESIRE and enjoy it as much as I did writing it.

If you would like to be notified in an email about the release dates of my books go to: to: https://donnalovitz.com/contact/

God Is Great, Wine Is good, People Have Always Been Crazy<< >>Tally Your Blessings